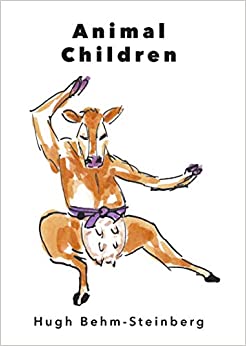 Light-winged, inspiring out of senses, a poetic collection so striking ever seen is the Animal Children by Hugh Behm-Steinberg. The poet has excelled in establishing a harmonious relationship that exists between poetry and life which appeals to the reader's emotions and produces a pleasurable effect.

Light-winged, inspiring out of senses, a poetic collection so striking ever seen is the Animal Children by Hugh Behm-Steinberg. The poet has excelled in establishing a harmonious relationship that exists between poetry and life which appeals to the reader's emotions and produces a pleasurable effect.

After reading Gentleness I felt as if a feather has caressed my face. The title of the poem is aptly named as the poem outshines in revealing the sensation of a gentle touch. Hugh tells us a story in an artistic poetic form of his schooling days that when he used to come back all the cattle had waited for him so that they can chew on him. I was amused to see that the cover of the book has a picture of a cow standing in a bit humoristic manner symbolizing the poet’s affection for them.

I was such a tough kid all the cattle would stop by our house to chew on me. They’d ring the doorbell, or they’d wait for me as I was walking home from school. Their hot breath, their sad eyes as my salt taste filled their mouths.

Soft Spot reflects light on a natural desire which typically comes in the early 20s of becoming a baby again. The speaker in the poem asks her mother “Why can’t I be a baby?” it sounds strange on a first read but there always comes a point in life when we humans miss our early life especially childhood. The speaker’s mother gives a quite valid reason at the end, “No matter how good you’ve been you’re not getting anything,” your mom tells you from the backseat, “because you’re a grownup now. Grownups never get anything just because they’ve been good.”

4-H is an organization that encourages children and teenagers to consider careers in raising animals; most counties in the US have a 4-H fair as part of their annual county fairs where children compete over the rabbits, chickens, goats, etc. they have raised, and where they earn ribbons for the size, health and beauty of their animals. The poet comes with an optimistic imagination in the poem by imagining the appreciation which his son will be getting in the 4-H fair from the judges for the nuns which he had been raising in the barn behind the house. The speaker is confident that his son will be “praised for the quality of their headaches and the curliness of their tails.” and he further mentions “That’s a fine blue-ribboned nun you got there,” they’ll all say.

My son’s hobby is raising nuns; he keeps them in the barn behind our house. He lets them loose in the field each day for exercise; they forage quietly and grow shiny and plump. When the 4-H Fair comes to town, he’ll show them off along with all the other nuns raised by the rest of the kids in the county.

Animal Children represents a meritorious, illuminating collection that will elate those who look for more of a simple expression of personal experience. I don’t remember as such how long it has been since I have read a book as delightful and exhilarating as Animal Children by Hugh Behm-Steinberg.

Eye to Eye with my Octopi by Richard Stevenson

Stevenson hits the entertainment buttons from all sides. These poems are simply for most all ages. He really makes poetry fun again. The poems liken to those of Lewis Carroll or Shel Silverstein. The poems are whimsical, but there’s a flurry of heart and introspection with a dash of satirical thrown in to each one, too.

For You To Heal

Joe Bisicchia has put together a book of poems about healing and trying overall to get better, and to deal with the process all of that may entail. The poems are written in free verse and prose. He uses a generous mixture of styles which gives it a fresh perspective.

THE MELANCHOLY LIFE OF DORIS MENNING

The titles are an artwork unto themselves. They are clever and well-formed. A good title is as much as part of a poem as the verses, lines and spaces and/or punctuation that make up each one.

A musical book of poetry awaits in this new collection by Michael L. Newell. The poems are all musical or music related, hence the title. The author states many of the poems were previously published in “Jerry Jazz Musician.” That publication also inspired the author to turn his poems into this manuscript.